When you are ready to dress up and do date night right, there are seven places I will hands down, always suggest. You’ll see below my take on each of these spots, from the absurdly trendy, to the cozy and low-key.

You’ll also see commentary from my boyfriend, Scott, who I’ve given his own “corner” to express his inner thoughts on each of my 7 Favorite Fancy Date Night Spots. He’s been to each of them, and has taken it upon himself to write his sassiest reviews.

Where: Lower East Side

Mary’s Take: If you are ready for a flashy night out, Vandal is where you start. Walk through a small flower shop that opens up into a giant graffiti-laden space and a massive purple bunny statue. Reserve a table beforehand, but get there early to have a drink at the bar. The restaurant is one of the biggest I’ve seen in the city, and there are multiple rooms with all different decor and wall art by major graffiti artists. The menu is themed as street food from around the world and everything you eat is not only delicious, it’s wicked cool. My faves were the mini ramen and NYC smoky street pretzel with steak tartare over the top. The servers, like the restaurant, are cool. They tell you what’s good with no BS. Beware of annoyingly underage Jersey girls in the tightest dresses you’ve ever seen. They might take pictures standing near their table for an hour straight. Besides them, the place is SO New York, and SO impressive. Bring your out of town date, to seduce them into moving to the city.

Scott’s Corner: Good food, but I feel like this place is trying super hard. It’s like Kanye West and everyone on Staten Island brainstormed a restaurant and made Vandal.

Where: Upper West Side 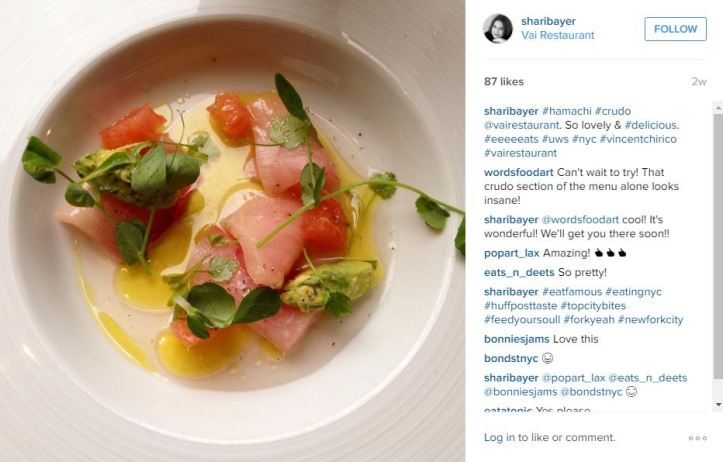 Mary’s Take: This is a tiny restaurant on the Upper West Side that makes tiny plates shine. First of all, muggles can’t see it. I mean…it’s like really hidden because the front is all black and you really have to look to see the name of the restaurant. Inside, it’s like your cool NYC friends’ apartment, with its exposed brick walls. Your extreme pleasure will come in the form of a cucumber martini and the hamachi crudo. From there, the obvious choice is burrata ravioli with white truffle cream (why do the best things have lactose?) It’s an intimate place, not in your face; a place to share every dish and comment on where the flavors are taking you. A really special place in the UWS.

Scott’s Corner: Outside appearance aside, it’s a good date spot.  And by good, I mean you can order a steak and trick your girlfriend into thinking it’s cute.

Mary’s Take: I’ve been to quality eats twice, as it is my favorite restaurant in the world. It is perfect in every way. The food is something that has yet to be duplicated. I recently tried the dish with crab meat and cilantro avocado (it’s an appetizer, but I had it as my main) and it was MINDBLOWING. I cannot…just cannot describe it. You need to go. And always, always, get dessert. Highly recommend the Birthday Cake Sundae, even if you can’t eat ice cream…and even if it’s not your birthday.

Scott’s Corner: Very tough to get reservations so plan on getting drinks elsewhere while you wait for your name to be called.  Come to think of it, maybe that’s why it’s so good. 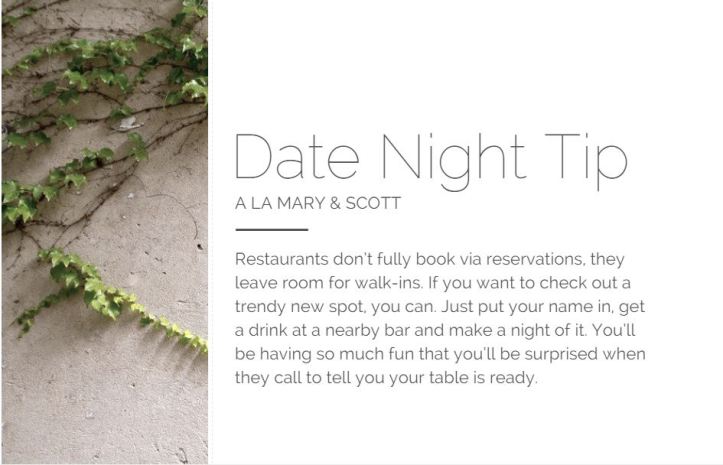 Mary’s Take: With all the trendiness of LES without the overt “trying too hard” atmosphere, KOA is where you go to get some one-on-one time with your date. The staff makes you feel like an uber covert famous person – one that wants to be given true privacy. The restaurant is mid-block in the Flatiron district, and is no stranger to this kind of hospitality. It’s steeped in Benihana legacy, meaning it’s all about theatricality. When I went on a Saturday night, it was quiet, but they are known for live jazz Mondays, and a Japanese artist does live painting on Fridays. I had sorba, which came in a giant bowl filled with delicious broth, just like ramen. The noodles were so not date-appropriate, which was hilarious. We were slurpin’ all the way to dessert (which was a FRIED BROWNIE SUNDAE by the way. Show me where else you can get one of those!) When I go back, I’m definitely choosing the soy broth, which we were able to get a taste of, it sounds strange but it’s creamy and warm and I could drink/eat it forever.*

Scott’s Corner: Solid spot in Flatiron – it’s affordable, trendy, and they taught me about fried brownies so who am I to criticize.

Where: Lower East Side

Mary’s Take: Locavores unite! Contra is a coursed meal that is pretty hipster-it uses local and seasonal ingredients, and each dish looks like an instagrammable piece of art. Scott took me here for my bday in 2014, the same year it won a bunch of awards for best new restaurant in NYC. It’s not the kind of place that creates flavor bombs with each meal. I mean, the flavors are sophisticated and unique, but subtle. The dishes were fresh and light, and each one had a little story that our server told us at each course. This is definitely a contemporary kind of place, for people with an open mind. Do I daresay it was actually HEALTHY as well? It felt like it, from the fresh beautiful carrots and asparagus, to locally sourced fish and cheese. Remember to get the bread when you go-it’s bomb.

Scott’s Corner:  Get ready to chuck your most recent paycheck out the window while you eat carrots, which Contra has somehow made delicious with what I can only assume is hipster ash-wood-colored magic.

Mary’s Take: Located down the tiny cobblestone streets of the West Village, The Spotted Pig is cozy and date-ready even before you enter. Sit upstairs on a velvety couch, or downstairs on a plush stool. Order the burger with ridiculously thin fries that are really fun to eat. Other top faves: Chicken Liver Toast and basically ALL the cocktails. Oh, I think Scott likes those ricotta ravioli but I can’t really eat them because of the whole lactose problem. This restaurant has one Michelin Star, and is one of our fave spots to go when someone gets promoted!

Scott’s Corner: They had a menu item called “pork faggots” once, so naturally it’s one of my favorite places.

Mary’s Take: Pure. Gluttony. That’s the only way to describe this meatpacking restaurant. Known for its frivolous weekend brunch, Bagatelle is still riding the “stylish, uber trendy and a little bit crazy” train for dinner. I went with a bunch of Yelp Elite members, and was treated to a…well…16 course meal. We were at a huge table and had roast truffled chicken, pizza with grated black truffle, tuna tartare (which I kept calling steak tartare due to the mass sums of wine), steak with make-your-own mashed potatoes, duck breast, octopus and like 6 desserts including a giant martini glass filled with a giant sundae. It was a loud, fancy and undeniably fun atmosphere with food that can only be described as explosions of flavor This is where you go on a double, triple, quadruple date to eat well and be merry until the wee hours of the night.*

Scott’s Corner: Chalk it up as a win if you don’t shit your pants by the end of the night.

*My meals were comped at Bagatelle and KOA